The ART&POPCORN film art centre was established in 2004 in Belgrade by a group of young filmmakers with the underpinning idea to produce good films.

At the time the company was established, they could boast the following as individuals: one feature film, ten short films, twenty-seven international film festival productions, one Berlin Golden Bear, the European Film Academy Award and an Oscar nomination.

Ten years later the company participated as producer, co-producer or executive producer in filming over twenty films, which makes it one the most productive Serbian film companies.

They participated with their films at over five hundred festivals spanning all six continents and were presented with numerous awards and recognitions.

Since its inception, ART&POPCORN gathered a young and talented team of professionals, authors and producers alike. Creative development of young directors remains one of this company’s primary goals. Apart from the youth, the company is also focusing on cooperating with renowned directors whose worth was already recognised and working together with foreign companies in co-productions to create new European films. Development, creative growth, meeting challenges and continuous presence at the European audio-visual scene / as well as complete dedication to the development and production of every film – is ART&POPCORN’s fundamental strategy.

The diversity of this company is also shown in the fact that the company has been managing the Fontana cinema in New Belgrade since 2012. The cinema is dedicated to promoting European cinematography and children’s films.

The ART&POPCORN film art centre was established in 2004 in Belgrade by a group of young filmmakers with the underpinning idea to produce good films.

At the time the company was established, they could boast the following as individuals: one feature film, ten short films, twenty-seven international film festival productions, one Berlin Golden Bear, the European Film Academy Award and an Oscar nomination.

Ten years later the company participated as producer, co-producer or executive producer in filming over twenty films, which makes it one the most productive Serbian film companies.

Since 2011 the company and Miroslav Mogorović as producer have turned to production and executive production of European films. They have brought companies from Germany, France, Holland, Belgium, Greece, Hungary and Spain to Serbia.

The positive ratio between the invested funds and production value that can be obtained in Serbia (i.e. that was obtained when ART&POPCORN was executive producer) served as a recommendation for following films.

Cooperating and working with foreign companies led to an advancement and expansion of the company when it was joined by Stefan Mladenović, who worked as Line Producer on most of these titles.

With a sizeable number of films made, the people and the company have developed into the largest and most reliable Serbian film company working with European partners.

Festival success followed the company’s development and a high number of awards on local and international festivals are proof of this.

After more than ten years, the Fontana cinema – a cult venue and New Belgrade’s favourite cinema – was reopened on 8 March 2012.

As a European and children’s films centre, its concept and objectives immediately set it apart from the rest, primarily in the approach to the audience. After the refurbishment of the old building, New Belgrade was given one of the most advanced cinema theatres. The thing that makes this cinema unique is the approach to selecting the films, with the aim of presenting the audience with true cinematic values and emphasizing quality – thereby educating and creating a new audience that will throng to cinemas like it used to.

With assistance from Film Centre Serbia and the EUROPA CINEMAS network of European film theatres, Fontana cinema aspires to promote both national and European cinematography, cultural diversity and European values. Therefore – apart from the regular repertoire – on average Fontana cinema hosts ten local and international festivals annually, with a tendency to increase the number year after year. Within the scope of activities of the Fontana cinema, we would like to highlight our support to authors, young students and their work.

FBO – Festival Box Office is an Internet platform that collects relevant data and numbers related to film screenings at festivals, with emphasis on the festival presentation of European films. Being an interactive platform, it provides quantitative data on a film’s performance at festivals (number of visitors, number of festival screenings, number of festivals where the film was screened and total film revenue).

Festival Box Office will collect information about the number of festival visitors and the total revenue of films participating in certain festivals, with the main emphasis being placed on European films and festivals. These important bits of information shall provide insight into a film’s success outside the regular distribution in cinemas. As such, this data may be relevant performance indicators for producers, directors, festivals, sales agents and funders…

The detailed overview of a film’s festival appearance offered by FBO can serve as a powerful tool to develop film distribution and enhance film production. This is a data base of great importance for the entire film industry, as it provides a detailed evaluation of the films’ performance at festivals, audience feedback and commercial success. 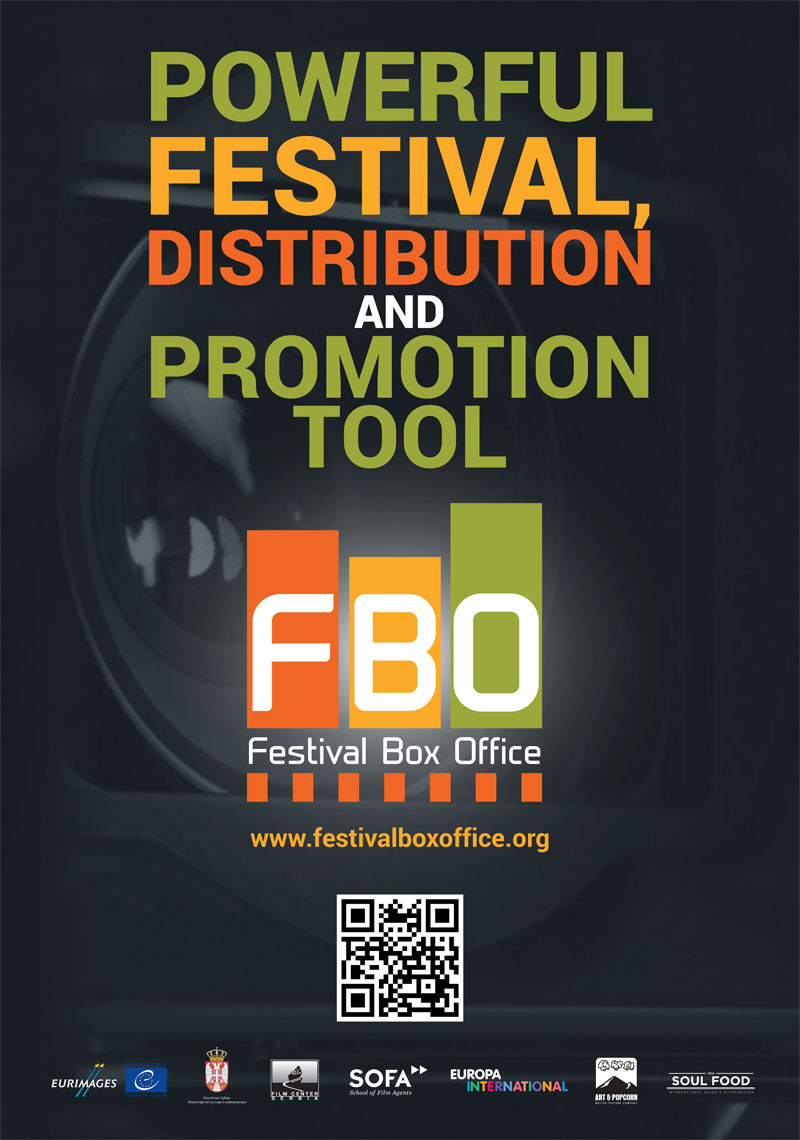 European Film Festival Palić was established in 1992 by the Subotica Municipality. From its very beginning, executive production was entrusted to the Open University and Art&Popcorn managed the festival, transforming  small and unpretentious film nights into one of the most important film festivals in the Region and creating a meeting place for authors of the Seventh Art.

Nowadays, over 85 films are shown at the European Film Festival Palić in nine programme sections, at five venues, representing a meeting point between the public and contemporary trends in film industry with the aim of better understanding of the social, cultural and life context of the time we are living in. Aside from new film productions and encounters with their respective authors, Palić also hosted many great names in the film art, from Ken Russell, Istvan Szabo, Ken Loach to Jirzi Menzel and many others, and presented them with the Aleksandar Lifka Award for their exceptional contribution to European Cinematography.

Since 2006 the Festival has been showing a film series entitled The Great Names of European Cinematography once a week, often followed by some lectures and guest-appearances from film critics and authors, in order to widen its mission throughout the whole year and to focus on educating the public regarding film. Moreover, we have created a place for new authors from Subotica and Serbia to present their work, as well as enabling festivals from the Region to share their film programs with the local public.

Miroslav Mogorović was born in 1972. in Zemun, Serbia.

After working for ten years as festival & event organizer, in spring 2004, together with the group of young film professionals, he established “ART & POPCORN Motion Picture Company”, and entered the production market independently.

In 2011 suggested by the Serbian government got a nomination and got elected for the National Counselor for Culture of the Republic of Serbia.

In 2012 after many years of work finally succeeded to restore cinema Fontana in cooperation with the Municipality of New Belgrade. Cinema Fontana, as a center of children’s film and European film, with its activities aims to educate by providing the insight into European cinema through a regular cinema program, through festivals and retrospectives of the European films. The program includes qualitative and educational film content both for children and youth.

Development of new ideas and searching for what the market needs has led to the development of FBO – Festival Box Office web platform in order to provide detailed insight into the festival life of individual films.

SKY ABOVE US, directed by Marinus Groothof; as co-producer (Rotterdam IFF)

REQUIEM FOR MS J, directed by Bojan Vuletic, as producer; (in preproduction)

NO ONE’S CHILD, directed by Vuk Ršumović, as producer

MY BEAUTIFUL COUNTRY, directed by Michaela Kezele, as executive producer

AGI AND EMMA, directed by Milutin Petrović, as co-producer and executive producer

THE HOURGLASS, directed by Szabolcs Tolnai, as co-producer and executive producer